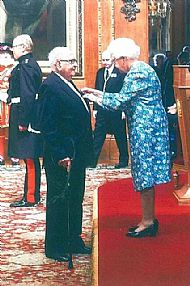 Eulogy by his nephew Ian Reynolds made at his funeral service:

Douglas George Reynolds, known affectionately to his friends, as ‘Dougie’.

In those 96 years, he met a staggering amount of people, and made a lasting impression on them, and I think that is borne out today by all the people gathered here,   to say their final goodbyes.

Doug was born to parents Harry and Alice Reynolds, and was the eldest of three brothers, the others being Geoffrey and Stanley, and they all lived in the aptly named Douglas Road, at no. 171, in Tolworth, Surbiton.

Aged just eight, Doug joined the Scout Movement as a Wolf Cub and was an enthusiastic Scout for the remainder of his life.

He was invested into 1st Tolworth then subsequently transferred to 1st Surbiton and, at 17, joined 2nd Tolworth Scout Group.

Doug enjoyed taking part in Gang Shows, and he once said that this developed his self-confidence which helped him with his many public roles later, in the wider community.

He became a founder member of the 2nd Tolworth Scout Guild and was later on the Executive Committee and a trustee of the Group.

Doug actively supported all the local Scout Groups throughout the District, and for more than fourteen years he held the appointment as Chairman for the Surbiton Scout District.

In 1988, Doug was awarded the ‘Medal of Merit’ by the Chief Scout, in recognition of his outstanding service to the Scouting Movement.

He was a first class Scout who will always be remembered by his many associates.

For Doug’s 12th birthday, his Dad offered him a choice of presents: it was either to have a watch, or to take a pleasure flight in a plane from Croydon airport. Like most 12 year old boys, he chose the pleasure flight option and that shaped his future during the war.

In 1940, Doug joined the RAF for his war service and started at the Ground Defence base in Cardington. He wanted to be an RAF pilot but a ‘wonky eye’, as he put it, stopped him from taking the flying training. He therefore trained as an electrician and was initially posted to Bari, in southern Italy.

His main job was servicing Dakota DC3 aircraft in 267 squadron and, on many occasions, he flew with them as a passenger on flights to drop supplies to the Italian partisans fighting against the retreating German forces around Florence.

In later years, Douglas was transferred to Rangoon in Burma, where he watched the Japanese surrender their swords.

To keep the spirit of scouting alive in the war, Doug also helped by running Rover Crews with his fellow like-minded airmen.

It was while serving as an airman in Italy, that Doug met the woman who was to become his wife – by post! In 1944 Doris, working in England for Fighter Command, responded to a newspaper appeal for a ‘pen pal’ from a lonely airman stationed in Italy.

A long-distance friendship flourished and the pen pals eventually met in 1945.  A year later, they were married and moved from 171 Douglas Road, to 30 Douglas Road, Dougie obviously liked the Road name!

Doug and Doris had a long and happy marriage, and they celebrated their Diamond wedding anniversary in 2007.

Doug was also a keen cyclist, and, in the late 1930s, he used to compete in time trials and regularly won medals. He and Doris would often jump on their tandem together and head off somewhere for the day or on a longer touring holiday somewhere.

After the war in 1946, Doug went back to working on the railway. He initially started as a Bookings Clerk at Kingston Railway Station in 1937 and, over the years, worked his way up through the dizzy ranks until he finally retired, 44 years later, as the Chief Signal and Telecommunications Engineering Accountant in 1981.

Doug’s work on the railways spurned his lifelong love for steam trains, and Doug was always booking trips here and there, to travel on anything that burnt coal and made smoke.

During his career on the railway, Doug became actively involved in politics, and was a staunch Labour supporter, something he inherited from his father.

For over 40 years, from 1950 to 1992 Doug was a Councillor on many wards including the Tolworth West ward and the Chessington South Ward.

I personally remember having a lift with my family in the mayoral Daimler down the A3 when I was about 14, and the chauffeur was keen to show the limo’s good turn of pace. When I asked if he could get a speeding ticket as we were doing nearly 100 miles per hour, Uncle Doug replied, “Well as I’m the local magistrate: I think he will be alright!”

Doug had many other political appointments throughout his life, with the Labour Party and the Transport Salaried Staffs’ Association, and he was to receive a Long Service and Merit award from the Labour Party in 2013 and was invited to be an Honorary Alderman in 2015.

Doug was also a keen supporter of both Probus and Rotary organisations and, in 1988, he was awarded the Paul Harris Award for his work in the local communities.

Doug was also on the committee of many, local organisations and Chairman of most, these included:

And not forgetting Friends of Richmond Park. Doug used to give walks and talks, and, by 2010, after doing this for nearly 30 years, he had led over 250 walks and given 485 talks.

To recognise this he was presented with a life time achievement award, and had a tree planted, in his honour, in the park.

When he couldn’t donate his time, Doug would donate his money instead, and Doug regularly donated to many national and local charities.

As we heard earlier, Doug has been presented with many awards during his lifetime, and to be fair, he liked his awards, along with a large glass or 2 of white wine!

But I think the award he was most proud of, was in 2012, when Doug was nominated for an MBE.

In July 2013, he went to Windsor Castle with three of his closest friends, Keith, Sheila and my wife Sue, and received his MBE, from the Queen herself.

Doug Reynolds led a full and energetic, 96 years of his life, and was easily recognised by his infectious laugh.

He was a one off with his dedication to the local community, and with his commitment to others.

He has left a legacy and will be sadly missed by everyone.